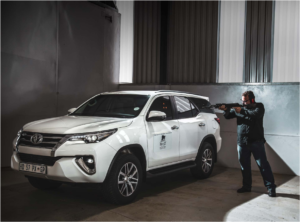 The AK47 assault rifle rests heavy in my hands … this is definitely not a normal day in the life of a CAR journalist. The weapon – and, yes, it is legal – belongs to Jaco de Kock, managing director of SVI Engineering (svi.co.za) and we’re standing in his facility’s self-contained shooting range outside Pretoria.

The mechanical sliding mechanism loads a 7,62 mm round in the chamber and what happens next literally takes my breath away. As I squeeze the trigger, the bullet leaves the barrel at over 800 m/s (2 880 km/h), with a recoil that hits my shoulder and the air pressure build-up in the confined space thumps against my chest.

Spare a thought for the B6-specification AGP glass-test panel that gets the full brunt of 3 300 joules as the speeding projectile rips out shards of glass that explode against the sidewalls of the enclosure. We walk through the haze of gunpowder smoke to inspect the damage. As it was designed to do, the glass has deflected the bullet perfectly with no penetration of the pane. This could have been a life saved.

Armour is common in military vehicles (SVI is developing its MAX9 military armoured personnel carrier next door) but there are many reasons for civilian vehicles to have armour, too. Politicians and company CEOs are obvious customers, but so are armed-response teams, cash-in-transit vehicles and even families requiring protection against possible hijacking.

To find out how a normal passenger vehicle is transformed into a safety shield, we witnessed SVI converting a Toyota Fortuner to B4 armour specification, with minimum impact on the looks or performance of the vehicle. This spec stops bullets fired from a handgun.

Dissipating the energy carried by a speeding bullet requires special materials. Armour spec is divided into classes of protection, with European standard EN 1522/1523 being most common. The term FB4 (or B4) indicates handgun protection, while FB6 (or B6) withstands assault rifles such as an AK-47 (the equivalent German spec levels are VPAM 4 and VPAM 7).

According to De Kock, the quality of the materials they use are critical to an armoured vehicle’s effectiveness and they’ve improved considerably over the years, getting lighter and stronger. At considerable cost, SVI sources most of its materials from American or European suppliers to ensure quality and traceability. B4 specification requires between 18 and 24mm thick armoured glass and 5 you 7mm Kevlar blankets (at over R30 000/m2) for the body panels.

B6 specification, meanwhile, includes 36 – 48mm thick armoured glass, with 5mm thick special armour plating for the body that has to be welded into the vehicle to create a passenger safety cell.

To test the level of protection, the European spec requires that the test sample is shot three times from a distance of 10 metres with the three holes forming a triangle with 120mm sides. The bullet weight and type, and nozzle velocity, are specified. It is important to note that there are many variables at play and any armour eventually gives way if enough rounds are fired in the same area. It is therefore advantageous for firms applying armour material to vehicles to conduct their own testing too.

Clients usually provide their own vehicles for adaption. One of the goals when armouring a vehicle is to provide maximum protection of the occupant’s safety cell while retaining all the vehicle’s safety and convenience systems, making it difficult to differentiate such a car from the standard version.

As the B4-specification level adds only 260kg to the Toyota Fortuner (for a 2,8 GD-6 AT model with a tare mass of 1 939kg), the combined mass falls well short of the maximum permitted mass (GVM) of 2 610kg. Therefore, there is no need to upgrade its structural integrity, suspension, brakes or powertrain. 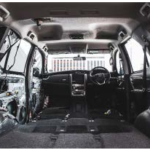 STEP 1: SVI dismantles the interior, glass and other areas that need protection. In the case of this Fortuner demo vehicle, the underbody and roof area are not covered because they are difficult to reach during a hijacking. 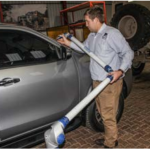 STEP 2: The standard body panels are measured using a 3D co-ordinate-measuring system to create digital models of the protective layers that would be needed; this is termed the armouring kit. 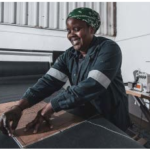 STEP 3: The glass is ordered to specification (the exact shape of the original, including any heating elements or antennae) while the Kevlar sheets may be cut in-house. 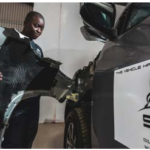 STEP 4: SVI installs the armour kit, including heavy-duty window lifters in the doors requiring an opening function. This is usually reserved for the driver’s door only but can be specified for the other windows. On the Fortuner the thicker bulletproof window can be lowered only a third of the way to prevent interference with locking mechanisms. 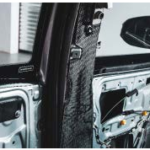 STEP 5: The armour installation goes through an engineering review to ensure the maximum area is successfully covered before the interior panels are refitted (some areas, such as the firewall, cannot be 100% secure because of electrical harnesses and mechanical components running through them). 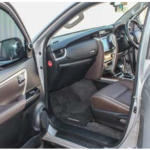 STEP 6: The modified trim panels (adapted because of extra glass thickness) are retrofitted but not before all airbags and other safety systems are reinstalled in the factory OEM positions. 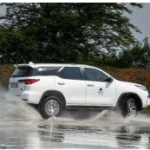 STEP 7: SVI conducts a rain and diagnostic test before embarking on a 300km road test to ensure all systems are operational and there are no rattles and squeaks. Interestingly, an armoured vehicle is better insulated and therefore quieter, making it easier to identify rattles. 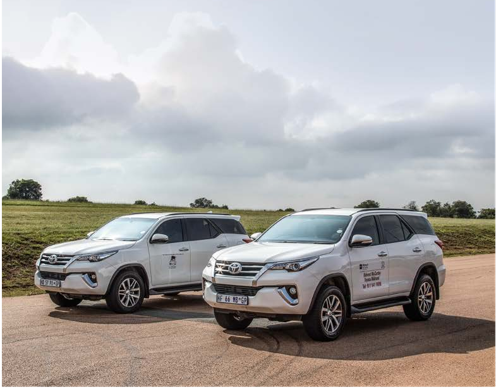 To compare the performance of an armoured versus a standard vehicle, SVI booked Gerotek’s testing facility outside Pretoria and Bidvest McCarthy Toyota Midrand (011 541 8600) loaned us a standard Toyota Fortuner 2,8 GD-6 AT 4×4 as the control vehicle. As our armoured version was a 4×2 and not a 4×4 like our control Fortuner, we added a further 115kg in ballast to the armoured car prior to testing. 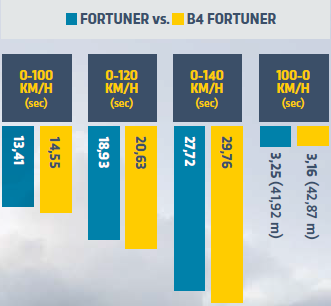 The armoured Fortuner’s dynamic performance was only slightly hampered on the handling track; certainly no more than a standard Fortuner if it were carrying a 260kg load. The CEM suspension setup and brakes coped well during a spirited driving session, showing that the driver would still be capable of driving away from danger at speed.

Next we connected our Racelogic Vbox testing equipment to both vehicles to evaluate straight-line performance, averaging the results from three runs in each vehicle. again, the armoured vehicle’s slower acceleration was no surprise, but there was little difference in the braking times.